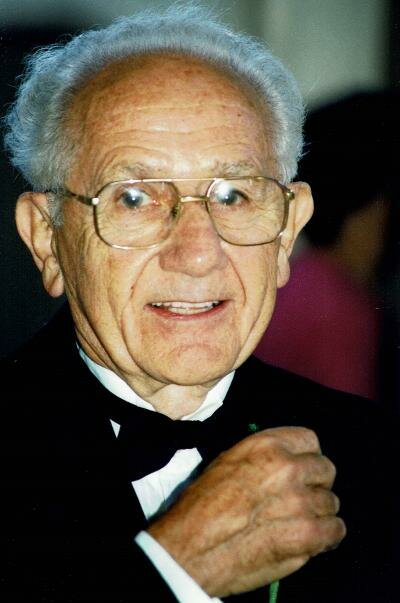 10:00 am
All Saints Catholic Church
502 High Street
Burlington, New Jersey, United States
Please Meet at the Church for the Mass

Please Meet at the Church for the Mass

Please share a memory of Adriano to include in a keepsake book for family and friends.
View Tribute Book

Adriano Joseph "Barrel" Marinelli, passed away peacefully on October 15th surrounded by family and his friends at the Masonic Village after a long battle with Parkinson's Disease at the age of 93. He was predeceased by his wife, Betty (Elizabeth Anne Corbett) of 51 years, his parents, Bruna and Domenico, his sisters Fernanda (Rox) Iovine, Mary (George) Pettit and Clara (Bob) Harris, and his brothers, Mario (Mary), Anthony (Maribel), Marcello "Chet," Richard "Dick" (Elaine), and William (Annette) as well as his brothers-in-law, Ed Rassman and Thomas Ward and beloved nephews. He is survived by his children, Dianna (Bob) Rosenheim and Joseph (Carol) Marinelli and his seven grandchildren, Evan, Eric, Lilly, Emma, Grace, Claire and Ian, as well as his in-laws, Doris Marinelli, Pat Rassman, Barbara Ward, Dianna Corbett, William (Patricia) Corbett, Michael (Lisa) Corbett and Margaret (John) Martin, and by numerous loving nieces and nephews, great nieces and nephews and other relatives. Adrian lived a wonderful life. He grew up in Burlington, the seventh child of Italian immigrants from Sant'Elpidio a Mare who moved to Bordentown Road. He was part of a great family and frequently spoke fondly of his mother's cooking and his fun childhood. He graduated from Burlington City High School in 1946 after a stellar varsity basketball year and enlisted in the Army Air Force. He spent three years in Tachikowa, Japan for the 13th Air Depot (earning the rank of Sergeant) and returned to go to college on the GI Bill at Rutgers University, hitchhiking to and from school on holidays. At Rutgers he took up Lacrosse and played on the varsity team. He was a member of Beta Theta Pi fraternity at a time when fraternity brothers wore suits! He graduated from Rutgers with a Bachelor of Science in Education and then received a Master of Education from Springfield College in Massachusetts. Adrian worked for 35 years for the New Jersey Division of Vocational Rehabilitation where he helped people with disabilities overcome barriers to employment. He was a member of the Lions Club and Knights of Columbus. In 1965 he married the love of his life, Betty, whom he met through the Catholic Association of Young Adults, and they moved to Riverton and then Roebling. They joined Holy Assumption Church where Adrian devoted countless hours working with Father Capistran and Holy Name Society members on construction projects, communion breakfasts, volunteering with Betty on Saturday nights catering weddings, and working on the annual school carnival. Adrian also sang in the church choir, was a Eucharistic Minister and was on Parish Council for many years. He thoroughly enjoyed volunteering for the church and the comradery of working with church members, his good friends. Adrian was very religious and devoted to the right-to-life cause, and until recently, annually organized bus trips to Washington D.C. to demonstrate. He also organized annual bus trips for a men's religious retreat. In addition to his church friends, he made many other wonderful friends in Roebling, enjoyed great times with his Station Road neighbors and spent many industrious hours working with these friends, digging backyard wells and installing pools. He also proudly served on the Board of Directors for the Credit Union of New Jersey from 1973 to 2002. Everyone knows of his great love of good food (he always cleaned his plate!). Adrian also loved gardening. He spent many peaceful mornings tending to his large organic garden and grew huge healthy vegetables of all kinds using his home-made compost. He loved to eat his vegetables in at least one salad every day! He was also known for the delicious figs he cultivated. In later years, Adrian was an active member of the South Jersey Organic Gardener's Club. Most of all, Adrian was devoted to his family. He loved holiday family gatherings for both the food and the company! While he was a wonderful and loving father, he was an even more fun and devoted grandfather (aka Nonno). He so loved spending time with his grandchildren, especially at the beach each summer doing puzzles, playing beach sports and especially body surfing the waves. He frequently told others how he felt privileged to be able to spend so much time with them, and they loved playing, exploring, eating ice cream and enjoying Story Book Land with him. He was so proud of them, each unique, smart and individually talented! He was a very important part of their lives and will be greatly missed! Adrian is frequently described as a true gentleman, admired for his kindness and gentleness. We know he was grateful for the wonderful and interesting friends that touched his life, for his loving and fun extended family, for his parents, and for all the blessings God gave him including the wonderful staff at Masonic Village that cared for his every need for almost two years. He was a 25-year colon cancer survivor. Amazingly, he never complained about all of the things that the Parkinson's Disease took from him, and he tried to fight its grip on him to the end. He is now at peace, free from this disease. Visitation will be from 6:00 PM to 9:00 PM on Thursday, October 21, 2021 at Koschek and Porter Funeral Directors, 1115 Hornberger Avenue, Roebling, NJ. Relatives and friends are invited to meet at the church for a Mass of Christian Burial on Friday, October 22, 2021 at 10:00 AM at All Saints Church at 502 High Street in Burlington. In lieu of flowers, donations can be made to Good Counsel Homes (600 Meadowlands Parkway, Suite 251, Secaucus, NJ 07094) or to a charity of your choice. Condolences may be sent to www.koschekandporterfuneralhome.com

Share Your Memory of
Adriano
Upload Your Memory View All Memories
Be the first to upload a memory!
Share A Memory