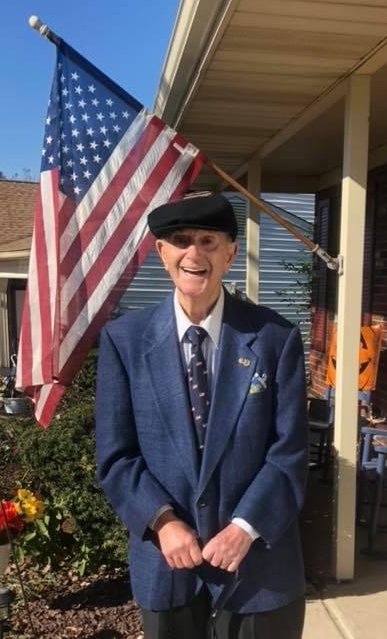 Please share a memory of Louis to include in a keepsake book for family and friends.
View Tribute Book

Masonic Village at Burlington: Louis Peter "Lou" DellaValle (Luigi Pasquale), age 94 of the Masonic Village in Burlington departed this life peacefully on Friday, July 9, 2021 at home in the company of his loving family. Mr. DellaValle was born in Brooklyn, New York and was the youngest of 9 children to the late Ettore and Concetta Gargulio DellaValle. He moved to Old Bridge in 1972 and resided there with his wife and daughter until relocating to Homestead at Mansfield in 2001. In 2019, he and his wife moved to the Masonic Village of Burlington. Louis served his country with honor in the US Army during World War II and earned a Victory Medal. He also served his community on the Old Bridge Police Force and unselfishly shared his time with the Masonic Village as a volunteer. Louis retired from Sterling Mounting and Finishing Co. in Manhattan, New York after more than 25 years of dedicated service. After retirement, Louis worked as a quality control specialist for Nifty Products in Old Bridge, part time. Lou will be fondly remembered for his carefree nature, gentle personality, infectious smile and ever present sense of humor. Most importantly he will be remembered for his loving devotion to his wife, Evelyn and daughter, Nancy and being Pop Pop Louie to the pride and joy of his life, Valerie and Jack. In addition to spending time with his family, Lou enjoyed traveling with his wife, drawing, playing pool volleyball, bocce ball and mastering his billiard skills. Louis was gifted with a special talent for repairing household items and cultivating his garden. Mr. DellaValle was a member of the Wesley United Methodist Church in Columbus where he and his wife, Evelyn were greeters and he was also an usher. He was an active member of the Willitts Hogan Tonne American Legion Post 39 in Roebling for about 15 years. He was predeceased by his brothers, Charles, Patty, Al, Joe and Johnny and sisters, Rose, Nancy and Anna. Lou is survived by his wife of 57 years, Evelyn A. Petrit DellaValle, daughter and son-in-law, Nancy and John Thorpe and grandchildren, Valerie and Jack Thorpe. Funeral services will be 11:30 AM Monday, July, 19, 2021 at the Wesley United Methodist Church, 24573 East Main Street, Columbus with Pastor Neill Tolboom officiating. Friends may call Monday from 10:30 AM until the time of service at the church. Interment will be in Brigadier General William C. Doyle Veterans Memorial Cemetery, North Hanover Township. The family requests memorial donations be sent to the Pulmonary Fibrosis Foundation, 230 East Ohio Street, Suite 500, Chicago, IL 60611 https://secure.qgiv.com/for/pulfibfou/  or Deborah Hospital Foundation, 212 Trenton Road, Browns Mills, NJ 08015 https://www.deborahfoundation.org/donate/ Condolences may be sent to www.koschekandporterfuneralhome.com

Share Your Memory of
Louis
Upload Your Memory View All Memories
Be the first to upload a memory!
Share A Memory