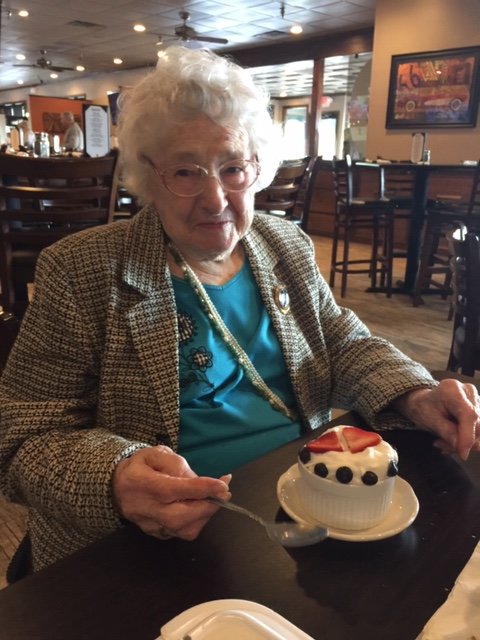 Florence: Joan E. Zacharchuk, age 93 of Florence passed away Friday, March 15, 2019 in Samaritan Inpatient Hospice at Virtua Memorial Hospital, Mount Holly. Mrs. Zacharchuk was born in Baumber, England and was the daughter of the late John W. and Kathleen Howsam Ellmore. She resided in Florence for more than 71 years and was a retired telephone operator, employed by Bell Telephone / Verizon in Florence and Burlington with many years of dedicated service. Joan was a "Special Nana" to her grandchildren and great grandchildren who brought her much happiness. She was a member of Sts. Stephen and Barnabas Episcopal Church in Florence, the VFW Scholarship Committee, the Burlington Garden Club serving as past president and treasurer, Garden State Storytellers League and the National Story League serving on the Convention Committee.  Joan was creative and multitalented creating beautiful oil paintings, designing doll clothes, dresses, gowns and Halloween costumes for her children and grandchildren and crocheting afghans and knitting for family members and their canine companions. Mrs. Zacharchuk was an avid reader of historical fiction of the British Isles and an accomplished author of children's stories published in the National Story League Magazine. Joan took much pride in her floral garden and creating beautiful floral arrangements. Some of her most pleasurable times were spent with her family and ballroom dancing. She honorably volunteered at the Masonic Home and was a docent for the Smithville Mansion for many years. In addition to her parents, she was predeceased by her husband, William Zacharchuk, grandson, Brian W. Roberson and sisters, Betty Morter & Margaret Salmon. Joan is survived by her children and their spouses, Jennifer K. & Mati Reinfeldt and Diana J. & Jim Kerstetter, sister, Gwendolyn Jones, 3 grandchildren, Vanessa L. & Todd Brown, Miranda Reinfeldt, Hilary & Matt Hansen, 4 great grandchildren, Hunter & Sienna Brown, Jocelyn & Cosette Hansen, many nieces, nephews and close friends. In lieu of flowers, the family requests memorial donations be made to Sts. Stephen & Barnabas Episcopal Church, 35 West Second Street, Florence, NJ 08518 or Samaritan Hospice, 5 Eves Drive, Suite 300, Marlton, NJ 08053. A memorial service will be Thursday, May 2, 2019 at 11:00 AM in Sts. Stephen and Barnabas Episcopal Church, 35 West Second Street, Florence, NJ 08518. There will be no calling hours. Condolences may be sent to www.koschekandporterfuneralhome.com

To plant a beautiful memorial tree in memory of Joan Zacharchuk, please visit our Tree Store
Thursday
2
May

There Will Be No Calling Hours

Share Your Memory of
Joan
Upload Your Memory View All Memories
Be the first to upload a memory!
Share A Memory
Plant a Tree