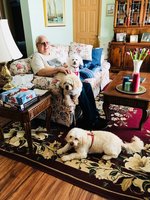 Edgewater Park: Michael J. Remich, age 76 of Edgewater Park, New Jersey died Sunday, November 15, 2020. Mr. Remich was born in Trenton and was the son of the late Michael J. and Viola Canigila Remich. He was a retired administrator for the Board of Pensions of the Presbyterian Church of Philadelphia with more than 20 years of service. He served in the US Army during the Vietnam War and received the Bronze Star.  Michael was a 1962 Graduate of Florence Township Memorial High School and received his Bachelor of Science in Business Administration from Rider College in 1966. His passion for the marching arts led to his involvement in all phases of Drum and Bugle Corp and Color Guard. Mr. Remich was an active member of the Hussars Color Guard, the Black Watch Color Guard and the Marshall Band. Michael was a mentor, guide, instructor and loyal friend to many young people throughout his 50 years of dedicated service. He was inducted into the National Association of Judges Hall of Fame and was respected and loved by all who had the privilege of knowing and working with him. His innovation and professionalism will continue to leave an indelible mark on the marching arts for years to come. Michael was an accomplished interior designer and gourmet cook specializing in fine dining. His outgoing personality and magnanimous spirit will be forever in the hearts of those who had the privilege of being associated with Michael. He was the epitome of an honorable man. He is survived by his cousins and their families, Sharon and Thomas Dutko of Browns Mills, Elaine Smith of Edgewater Park, and Alan Caniglia and Janneke van Beusekom of Lancaster PA, his “Second Cousins”, Duffy, Brandy and Maggie, long time family friend, Matthew Favuzza of NYC, many friends who were like family to him and the Alumni of his 1962 graduating class of Florence Township Memorial High School.  Funeral services and final disposition will be held privately. In lieu of flowers, the family requests memorial donations be made to Multiple Myeloma, c/o International Myeloma Foundation Headquarters, 12650 Riverside Drive, Suite 206, North Hollywood, CA 91607. Condolences may be sent to www.koschekandporterfuneralhome.com