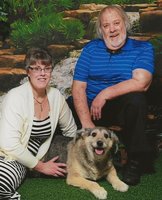 Roebling: John T. Reeder III, age 65 of Roebling passed away on Monday, December 16, 2019 in Samaritan Hospice, Virtua Memorial Hospital in Mount Holly. Mr. Reeder was born in Trenton and was the son of the late John T. Jr. and Alice L. Jobes Reeder. He resided in Roebling lifelong and was a 1973 graduate of Florence Township Memorial High School. He went on to further his education at Memorial Hospital of Burlington County and became a radiographer. During his 26 year career he served in several hospitals and healthcare facilities throughout the area. John enjoyed simple pleasures in life. He was enthusiastic about American History, fond of playing a game of chess and enjoyed baseball. John was particularly caring toward his canine companions. Nevertheless, Beatles music was John's passion and it was that part of him that made him who he was. Mr. Reeder was a member of the Chess Club of Burlington. In addition to his parents he was also predeceased by his brother, Edward Reeder and mother-in-law & father-in-law, Esther Tillinghast Lukens and Michael "Hutch" Lukens. He is survived by his wife of 31 years, Cathe Lukens-Reeder, his siblings and a spouse, Jimmy Reeder, Nancy Reeder Biocco, Stephen and Maryann Reeder and David Reeder, sister-in-law, Margery Lukens, aunts, uncles and cousins, including Charlie Reeder, several nieces and nephews, a great niece, Madison Stackhouse and lifelong and unwavering friends, Eugene Montalto, Earl Richardson and Steve Nemeth. Funeral services will be Saturday 11:00 AM at Koschek and Porter Funeral Directors, 1115 Hornberger Avenue, Roebling with Deacon Gary Richardson officiating. Friends may call Friday from 6:30 PM to 8:30 PM and Saturday from 9:30 AM until the time of service at the funeral home. Interment will be in Calvary Cemetery, Florence. In lieu of flowers, the family requests memorial donations be made to the Burlington County Animal Shelter, 35 Academy Dr., Westampton, NJ 08060. Condolences may be sent to www.koschekandporterfuneralhome.com